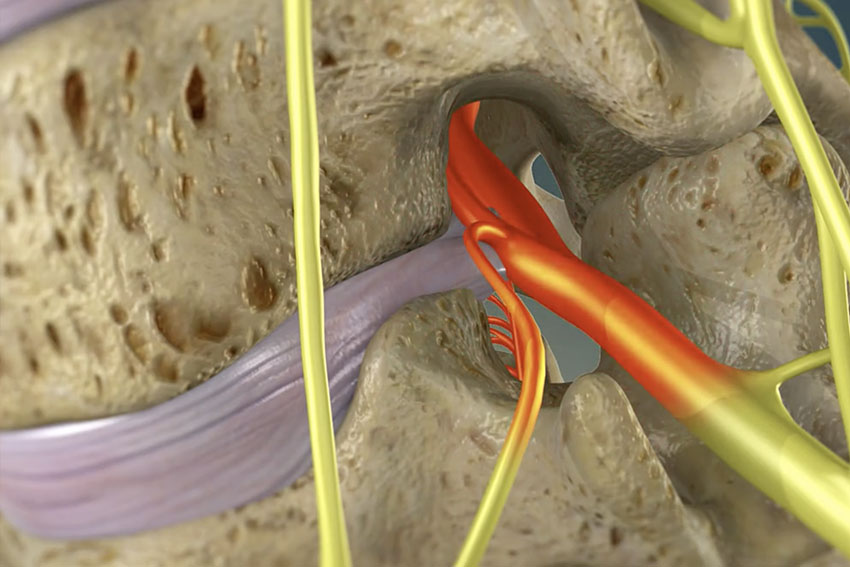 For example the L4-5 foramen is formed between the L4 and L5 vertebrae. The boundaries of the L4-5 foramen are cephalic: L4 pedicle, superior: L4-5 facet joint/ L5 superior articular process, caudal: L5 pedicle and inferiorly the L4 and L5 vertebral bodies and L4-5 disk. The medial aspect of the foramen is the spinal canal and L5 transversing nerve root. Blood vessels and L4 spinal nerve pass through the foramen.

If the foramen decrease in size the exiting nerve root will be pinched and may cause radicular symptoms such as pain, numbness and weakness in the leg. Common causes of foramina stenosis (tightness) include bone spurs, synovial cysts, foramina disk herniation, spondylolisthesis (upper vertebrae slips forward on the lower vertebrae") and spinal stenosis.

Foraminotomy is a surgical procedure done to open tight foramen and unpinch the exiting nerve root. Traditionally this was done with a laminotomy. We will use the L4-5 level as an example. The patient would be placed under general anesthetic and positioned face down. The back was cleaned and draped. The L4-5 level would be located with fluoroscopy x-ray machine. A large 2 to 3 inch midline skin incision was made to identify the L4 and L5 lamina. Part of the L4 and L5 lamina and facet joint were removed with the drill and bone cutting instruments. This would give access to the L4-5 foramen. Kerrison punches, biting instruments, are stuck into the foramen to remove bone spurs or disk herniation to relieve pressure on the disk. This is done blindly. There is no way to see in and through the foramen. The patient is usually admitted overnight for observation and discharged home the next day.

This now be done percutaneously with the endoscope. This if often called Laser Spine Surgery. This procedure is much less painful and can be done away under twilight anesthesia. It also allows direct visualization through the foramen. After the patient is prepped and draped, a spinal needle is place 10-12 cm off midline under fluoroscopic guidance through the L4-5 foramen onto the L5 vertebrae. A K-wire is placed through the needle and the needle is removed. A small 1/3 inch incision is made. The soft tissues are dilated with a series of dilators. A access port is placed over the dilators into the foramen. An endoscope is used to visualize foramen and inside the spinal canal. The foramen is opened up with special bone cutting instruments and electric drill. Bone spurs, disk herniations, synovial cysts can be removed under direct visualization. After decompression is completed, the access tube is removed and single suture and bandaid is placed to close the small incision. The patient is discharged home same day, 1 to 2 hours after surgery.